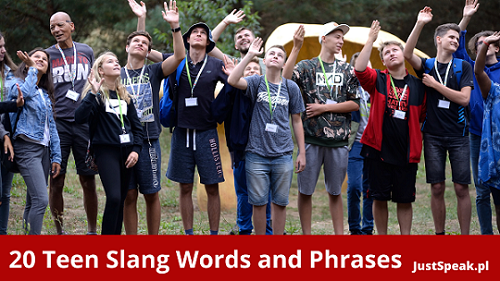 GOAT means greatest of all time
Example: „Jennifer Lopez is the GOAT.”

Fam means best friend or family. It is similar to saying dude, bro, or bestie
Example: „Sorry fam I can’t hang out later.”

Bae means boyfriend, girlfriend, or someone very much loved by the person
Example: „Marta is bae. I love her.”

Doe is used in place of „though” for more emphasis
Example: „That new song, doe.”

Extra means someone is a high-maintenance person
Example: „My mom’s being so extra today.”

FUBB stands for „Fouled Up Beyond Belief” and is an acronym to signal a mistake
Example: „FUBB.”

Hangry is a combination of hungry and angry
Example: „I need to eat. I’m getting hangry.”

Throw Shade at someone means to give them a dirty look
Example: „Emily just threw shade at Mark. They must be fighting.”

Ship means you’d like to see two people in a relationship
Example: „I ship Anna and Paul.”

Snatched means that they are on point, looking good
Example: „Her outfit is snatched.”

Squad describes a group of friends that the teen regularly hangs out with. These are the closest friends or friend group
Example: „I’m going to the game with the squad tonight.”

Thirsty means the person is just trying to get attention and often in desperate and not very attractive ways
Example: „I can’t believe she did that. She’s just thirsty.”

Yaass! means „yes” with a lot of emphasis, used when someone is excited about something
Example: „I’m getting a new car! Yaass!!!”

Yeet  means to throw away or remove quickly, can also be used to express excitement or to point out when someone is destroyed in a video game context
Example: Adam shouted „yeet” when he beat his friend in Fortnite.

Woke means to be culturally in touch and enlightened regarding current societal issues
Example: „You need to get woke.”

Shook describes someone’s reaction when someone says something that shocks or surprises them
Example: „This lady was yelling at a Starbucks employee and I was shook.”